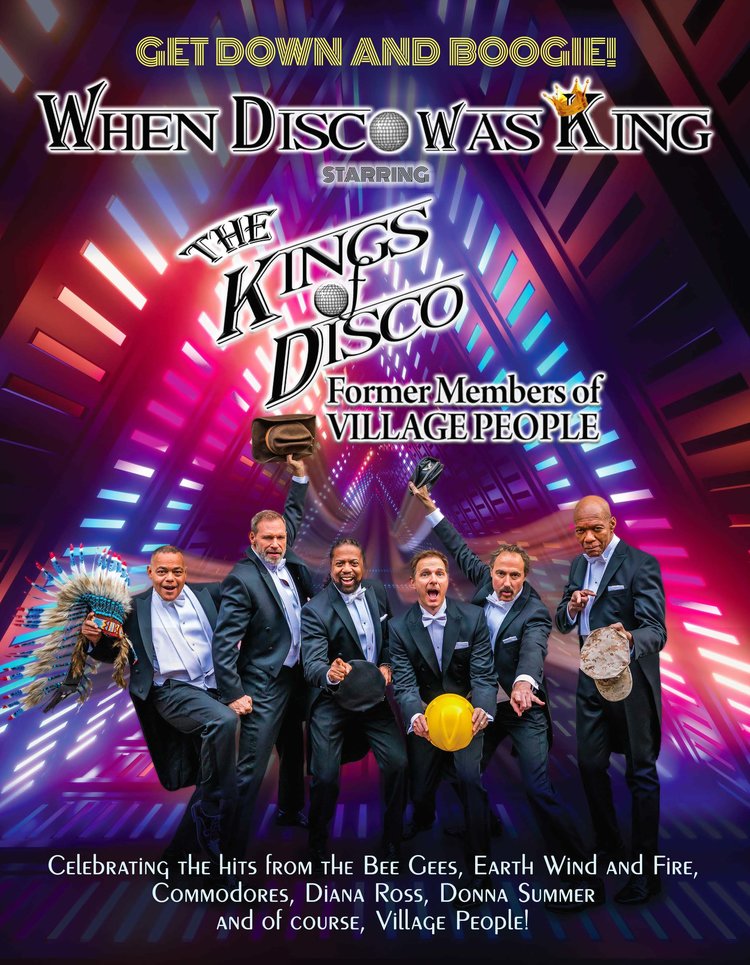 When Disco Was King

Starring The Kings of Disco - former members of Village People

Celebrating the hits from:
The Bee Gees
Earth Wind & Fire
The Commodores
Diana Ross
Donna Summer
and of course…Village People!

When Disco Was King is a full-length show that celebrates all things disco—the culture, the people, the era and most importantly, the MUSIC! Join Ray Simpson, Alex Briley, Eric Anzalone, Jim Newman, Bill Whitefield and Andrew Pacho, a/k/a The Kings of Disco—all former members of the world-famous group Village People—as they take you through the days of platform shoes, mirror balls, outrageous clothes, velvet ropes and, of course, nights filled with dancing!

The concert chronicles the history of the era using photographic vintage stills and video clips to illustrate the storyline as The Kings of Disco perform the major disco hits. Backed by a full band, The Kings of Disco sing, dance and get their boogie on to create a party like no other!

The evening is loaded with iconic disco hits from such groups as the Bee Gees, Donna Summer, Thelma Houston, Sylvester, Kool & the Gang, Trammps, Earth, Wind & Fire, Commodores, The Brothers Johnson, Diana Ross and, you guessed it, the Village People!

The Kings of Disco Former Members of Village People have toured the globe for over 30 years bringing in crowds of epic proportions! When Disco Was King is sure to draw audiences of all ages who are ready to party and dance the night away!