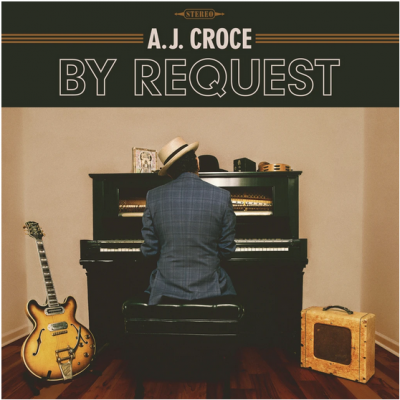 “Croce’s vocals blend the right measure of grittiness and honey; he delivers an aching ballad as easily as he shouts a jazz stomp, and his voice is the instrument that guides the melodies and other instruments on these tunes.”

“Regardless of the genre, Croce slides into his songs with an easy charm.”

Over the past three decades, A.J. Croce has established his reputation as a piano player and serious vocal stylist who pulls from a host of musical traditions and anti-heroes — part New Orleans, part juke joint, part soul. While his last album, JUST LIKE MEDICINE, paired him with soul legend Dan Penn and an all-star cast of players, his new album was born of memories — of favorite artists and shows, but mostly, of late-night gatherings with groups of friends, many of them fellow musicians, with Croce at the piano taking requests. Croce revisits these musical evenings on BY REQUEST, 12 personally curated covers that traverse decades and genres, propelled by his spirited, loose-and-easy piano mastery and emotive vocals.

From sharing an obscure song by Motown artist Shorty Long, “Ain’t No Justice,” to his funky, dead-on version of Billy Preston’s “Nothing from Nothing,” Croce keeps the virtual party hopping. While he delivers faithful recreations of such nuggets as The Five Stairsteps’ “Ooh Child” and Allen Toussaint’s “Brickyard Blues,” he puts his own spin on piano-driven arrangements of songs by Neil Young, The Beach Boys, Sam Cooke, The Faces and more. Young’s “Only Love Can Break Your Heart” is reinterpreted as a gospel song, and the Beach Boys’ “Sail On Sailor” becomes a trippy, rollicking ride. “I reimagined the arrangement, wondering how Willie Dixon would have recorded it if he were on psychedelics,” Croce explains.

Guitar legend (and Croce’s East Nashville neighbor) Robben Ford guests on a version of folk/blues greats Sonny Terry and Brownie McGee’s “Better Day” with stellar results. “I’ve loved Sonny and Brownie since I first heard them. This song was the first tune I learned on guitar. I added quite a few chords in my arrangement, but what’s new,” he quips.

Although he lost his famous father, music legend Jim Croce, when he was just two years old, he pays tribute by covering Randy Newman’s “Have You Seen My Baby” since the first show he attended was a bill featuring his dad and Newman. “I love so much of his music, and while this is by no means my favorite of his, it’s been a request at soirées. I sort of treated it as if Little Richard sat in with The Flaming Groovies and played it like I was 15, with reckless abandon.”

“BY REQUEST is my way of inviting you over for a private gathering at my place,” Croce says of the collection. “We listen to great music, laugh, make great food and after a few drinks and maybe a few more we end up in my music room and I start taking requests of every genre and era. The music is always fun and completely diverse. We’ll play and sing all kinds of music. Some of my friends are professional musicians, some do it for fun and many friends are just serious music fans. So you’ll fit right in.

“There’s no way that I could record the thousands of songs I’ve performed at home over the years, nevertheless every song on this album has been requested by close friends who have hung out at my place many times for many years.

“Welcome to my home, by request, you’re hereby invited to join the party.”

“In such a crowded music universe it is a pleasure to witness triple uniqueness; Pianist, songwriter, singer and at such a level. And who does he sound like?....The answer is; himself... A.J. Croce.” —Allen Toussaint

“A.J. Croce has wisdom beyond his years. With his music, he represents his generation with a profound sense of honesty in his lyrics and quality in his delivery. The future of entertainment is safe in his hands!” —Willie Nelson

Over his ten studio albums, it’s clear that A.J. Croce holds an abiding love for all types of musical genres: Blues, Soul, Pop, Jazz, and Rock n’ Roll. A virtuosic piano player, Croce toured with B.B. King and Ray Charles before reaching the age of 21, and, over his career, he has performed with a wide range of musicians, from Willie Nelson to the Neville Brothers; Béla Fleck to Ry Cooder. A.J. has also co-written songs with such formidable tunesmiths as Leon Russell, Dan Penn, Robert Earl Keen and multi-Grammy winner Gary Nicholson. His albums have all charted, and done so on an impressive array of charts: Top 40, Blues, Americana, Jazz, Independent, College, and Radio 1, to name a few. The Nashville-based singer/songwriter also has landed 18 singles on variety of Top 20 charts.

The late, great New Orleans piano player and Croce hero, Allen Toussaint, summed him up best: “In such a crowded music universe it is a pleasure to witness triple uniqueness: pianist, songwriter, singer and at such a level, and who does he sound like? The answer is himself ... A.J. Croce.”

In 2017, A.J. enlisted legendary Muscle Shoals producer/songwriter Dan Penn and an all-star backing crew that included Steve Cropper, Vince Gill, David Hood, Colin Linden, Bryan Owings, The Muscle Shoals Horns, and The McCrary Sisters for his album Just Like Medicine, which ABC News praised as sounding “like it was crafted with the influence of greats like Van Morrison, Bob Dylan and Elvis Costello in mind.”

A.J.’s deep love for music is understandable considering that his mother, Ingrid, was a singer/songwriter as was his father, the late Jim Croce. He never knew his father, who died in a tragic plane crash just before his second birthday. A.J., who started playing piano as a young age, purposely avoided his father’s music in order to establish his own identity as a musician. A.J.’s relationship with his father’s music began changing around a dozen years ago, when he began digitalized his father’s tapes. One old cassette contained a bar performance of Jim Croce playing blues tunes that had influenced him. These were deep-cuts by folks like Mississippi John Hurt, Blind Blake, Brownie McGhee & Sonny Terry, and A.J. was amazed since these songs were the ones that he had been playing since he was 12.

A.J. Croce’s family musical legacy is just part of his very unique life story. Born outside of Philadelphia, A.J. moved with his mother and father to San Diego when he was two. Around the age of four, he went blind due to horrific physical abuse from his mother’s then-boyfriend. A.J. was hospitalized for half a year and was totally blind in both eyes for six years. It was during this time that he started playing piano, inspired by blind pianists like Ray Charles and Stevie Wonder. Croce, who regained sight in his left eye when he was ten, went on to spend his early teen years performing including at his mother’s establishment, Croce’s Jazz Bar. In 2018 he lost his wife of 24 years, Marlo Croce to a rare heart virus.

• In the past couple years, A.J. has begun periodically performing a “Croce Plays Croce” concert, where he does Jim Croce songs, his own tunes, and songs that influenced the two of them. He loves seeing “the joy it brings audiences,” as well as enjoying that he can keep the shows fresh and exciting because he has the flexibility to change up the set list each time out.

• A.J. also did a cover of the Jim Croce hit “I Got A Name” in 2018 for a Goodyear Tires ad that honored race car driver Dale Earnhardt Jr.’s retirement. Over the years, A.J. also has written several tunes for commercials, including ones for Toyota, Coca Cola, and Levi’s. Watch on YouTube

What the press is saying....

Learn more about A.J. Croce on the following links